Let’s face it, none of us could resist these sweet fuzzy little kittens, stumbling around with their sweet voices, furry little butts, those eyes when they open for the first time…
The curiosity, and even the hissing is just adorable. But what happens when we take away those little furry bubbles from their mother a little too early?

So often, Non-responsible breeders who are just looking to get the best, fastest benefits out of their animals, urge people and start selling baby kittens at about 40 days old. And even though, according to vets, a 40 days old kitten could survive on its own.  However, there’s a huge difference between merely “surviving”, and taking time to develop properly to get the most benefits, they are intended to get from their mama.

Regardless of some unfortunate situations when a New Mama cat abandons her newborns, or passes away leaving her kittens on their own, kittens should be left to their mother, until she naturally starts rejecting them.

Kittens can acquire a lot of negative behaviors because of this early separation, as well as health deficiencies. A mother cat wean her babies naturally when kittens are about 2-3 months old, by starting to reject her kittens.

So what happens when you separate the kittens too early?

kittens can learn to get their sense of security from their human companions. But before that, they get their safety and calmness from their mother. So, early separated cats are more likely to be more fearful, until properly socialized. 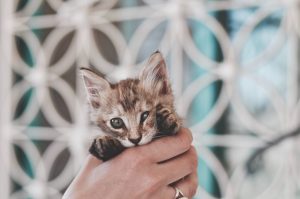 If you find your kitten biting on your hand “playfully” a little too hard that it drowse blood, there’s a good chance that she was taken away a little early before learning those skills.

Kittens, and all baby animals actually, learn how to give us soft bites and pull their claws in from their mother and siblings through play time. Playtime teaches kittens how far to go, and where to back down while playing, so they learn to use their tools right.
However, behavioral issues could be treated with the right training and patience.

At that early age, kittens learn everything by copying their mother. a well litter-trained mama cat, is more likely to give us well litter-trained kittens. So its easier to train them when they come home.
That being said, if your cat or kitten is not using the litter-box properly, that does not mean she must have been separated early.

I have another article explaining everything Litter-box related in details, so here’s the link, if you want to Learn how to properly Litter-box train or Re-train your Cat/kitten

Bringing a new Cat Home
Why should you never feed your cat a Dry Food ONLY diet?
11 Things to consider before choosing your First Pet

Hope you found that useful.. I’ll See you next time

Petsoholic.com does not intend to provide veterinary advice. My aim is to use my experience and research to help users better understand their pets and give them The Best Quality of Life they deserve. However, the content on this blog is not a substitute for veterinary guidance.